The Rotary May Day Parade has been cancelled.

Following direction from the B.C. Chief Medical Health Officer to cancel any indoor or outdoor public gathering of more than 250 people. The intent is to ensure the safety of residents by limiting gatherings where social distancing can’t be controlled.

Origins of May Day Celebrations

The month of May is believed to have been named for the Roman goddess of spring and growth, Maia. The month of May heralds the awakening and flourishing of nature and the coming of spring. In the City of Port Coquitlam, this month marks the celebration of May Day.

In ancient times, May was a time for outdoor celebrations. In Rome, it was a time that was sacred to Flora, the goddess of flowers. The Romans celebrated May Day with flower-decked parades. In England, the village youth went to the woods to gather spring flowers and hawthorne branches, returning singing and dancing. The flowering boughs they gathered were used to decorate the May tree. As the white flowered hawthorne tree became the tree most often decorated, it came to be called the May tree. In more recent celebrations, the May pole, symbolic of the May tree it has replaced, has been decorated with colourful ribbons.

The City of Port Coquitlam first introduced the celebration of May in 1916 when the principal of James Park School, Mrs. Enid Cox, arranged a small celebration for her pupils. The first official community May Day was held in 1923, when James Park and Central schools combined their efforts. It was in 1923 that Miss Evelyn Mars was crowned as Port Coquitlam’s first official May Queen.

In today’s Port Coquitlam May Day celebration, a May Queen and an Ambassador, along with the Royal Party, preside over the festivities, which include a parade, music, entertainment and dancing around maypoles. 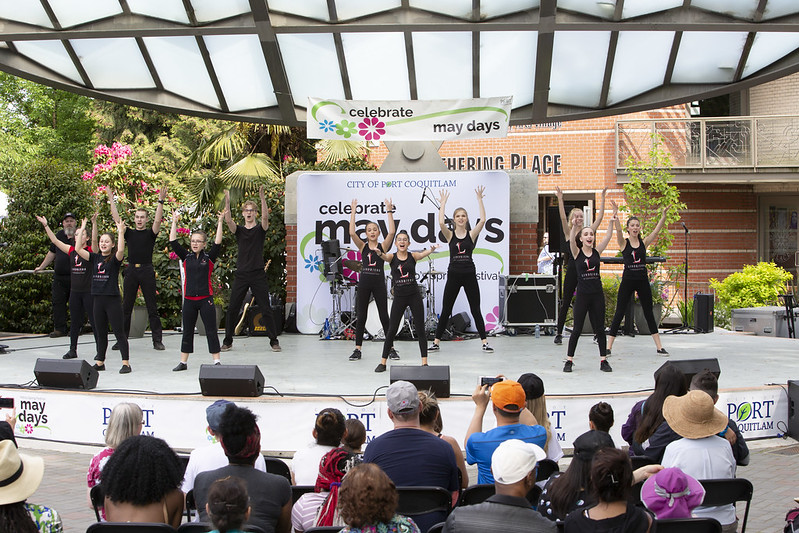